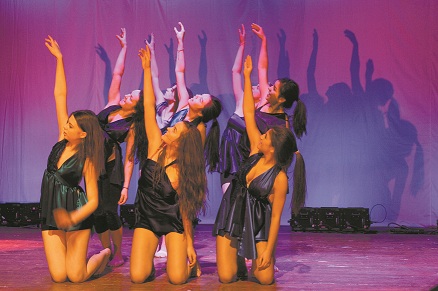 “Phenomena…” begins Alex Redinger, a grade twelve student at NT. “It was a thunderous intermingling of lighting and well-costumed choreography, sharply punctuated between acts by a probably-drunk audience member.” Being a fourth year NT student yet first time attendee, he says “the show was well worth the expenditure.”

Another fashion show has come and gone, and this year,Phenomena’s ticket sales alone have raised $21,000 for charity week’s 2010 recipient, Not for Sale.

Praise for the show can be found in every corner of the school. Cady Lewis, a grade eleven student, says, “Phenomena was a show to remember: from the great choreography to the wonderful designs, NT students should all be proud.”

Sabrina Ren, a designer, praises the promotional photos. She continues, “[Designing for the show] took a lot of work and I definitely spent like 100 hours trying not to poke myself with a needle. Overall, it was a great bonding experience too during rehearsals because we had to spend five hours every night with the same people.”

Kailee Mandel agrees that “the show was really awesome, and well done. The directors did an amazing job, both in the preparation of the show and of course during the performance. Lindsay, Rachel, and Alex really set the bar high.”

Not everyone was impressed though. One student commented that she didn’t attend the show because it looked “like a wannabe Enigma (2008)… Only not so good.”

Phenomena is the first fashion show to have notedly made efforts to become eco-friendly. This is the first year in fashion show’s nine year history that an environmental head was appointed. In preparation for the show there were talks of recycling fabric, reusing set pieces, and reducing acrylic paints. However, on the night of the show when the audience walked into the auditorium, the first thing that they saw was the Styrofoam cup columns hanging from the ceiling. Styrofoam is definitely not part of the eco-friendly deal.

Nevertheless, audience members including Remy Modak say that they “loved the swirly paper cup decorations. [They] really brought more attention to the runway.”

Set design head Paniz Moayeri admitted that set design’s green effort was not very successful. She explained that the set team originally had ideas to only use the recycled cardboard and wood from last year’s show, Hypnosis (2009), but “it proved to be impossible to continue. At the end, with Planet X and the columns, we went full out just to finish the set.”

This year’s environmental head, Christopher Blackford, said in terms of assisting the team with eco-friendly initatives, he “didn’t do anything.” The plan was that the team was supposed to ask for green advice from Chris Blackford but not one team member approached him.

On a positive note, Paniz says that leftover set materials are being passed onto a potential team for 2011’s fashion show.

As the models made their way onto the T, there were many exclamations over the designs of the dresses. Not only were the dresses beautiful, but Student Design head Biran Goswami says that they were also eco-friendly. “The way we got it out to the other designers was to tell them during the preliminary meetings to use pre-used fabrics and materials: Apocalypse and Reincarnation were the ones we really encouraged recycling.

This year especially, the heads and directors (who designed) really did re-use old fabrics to set an example, so we expect a lot more students will do the same next year. On an interesting note, the Archaic shirts were from goodwill with some leather patterns added on, and the Tunguska shirts were repainted from ones used in Enigma. Lindsay Hepburn, one of the directors, concluded, “I hope that future fashion shows will continue to implement our new initiatives, such as design leaders and the eco-plan. If the joke hasn’t run on long enough, it was a phenomenal opportunity.”