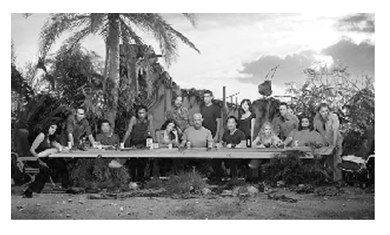 For nearly six years now, “Lost” has been the most mysterious show on television. And although many viewers were disapproving of the show’s last season, many flocked to their television sets on Monday February 2nd to watch the final season’s premiere. The episode begins exactly where we left off in the finale of season five, the sorrowful parting of Sawyer and Juliet and the explosion of the atomic bomb core. The scene continues on, now featuring Jack, sitting in an airplane in 2004. For a time, we believe that Jack, Kate, Sawyer, Hurley and John Locke are safely continuing on their original flight from Sydney to Los Angeles. All hope is shattered, however, once we emerge from a painfully long commercial break to see the season five ending repeated once more, now continuing into a different scenario. Jack, Kate, Hurley, Sawyer, Sayid, and Jin are once again on the island, apparently in the present time. While most doubted that the already complex show could become more complicated, the season six premiere removed all doubt.

Now, instead of viewers being confronted by backwards and forwards leaps in the narrative, we have these new sideways jumps, which breaches into the world of alternate universes. It was very interesting to see the supposedly happy ending, especially when it was shown that even though the passengers of flight 815 weren’t on a deserted island, they still managed to meet each other and become connected in some way or another. However, seeing as the time of the flight and the present time on the island differ by three years, it is, in some form, time travel. This makes it all the more confusing, and seems to be reaching a point where “Lost” will simply be much too difficult to follow. In season five, time travel was a very convoluted twist in the plot, and it didn’t connect to the plot line from the previous four seasons, and became much too prevalent in the story. I was really hoping that it would be finished with by the end of the fifth season seeing as time travel is generally a very questionable topic, that caused a lot of confusion for viewers who have their individual understandings of the concept.

Luckily enough, some of the shows original strange and secretive plot seems to be emerging in the sixth season. This includes the introduction of some very new and very mysterious characters. In particular, the man at the temple, Dogen, seems to be almost as complicated as the former leader of the Others, Ben, a character who really enhanced the show. The writers have also been ruthless when it comes to character deaths, as in this episode alone, more than six characters died, including the important characters Juliet and Sayid (though he comes back to life). However, the worst is yet to come and as rumours of the show’s finale begin to brew, it is very likely that the shows creators (J.J. Abrams, Jeffery Lieber, and Damon Lindeloff) still have an ending that is sure to shock us. All in all, “Lost” has clearly proven that it will retain its standard of strangeness even as it heads into its finale, the premiere promised a much clearer storyline that is devoid of muddled and, at some points, very confusing time travel. My prediction is that true “Lost” fans will not be disappointed by this season.