A new normal: How three NT students are coping with the COVID-19 pandemic 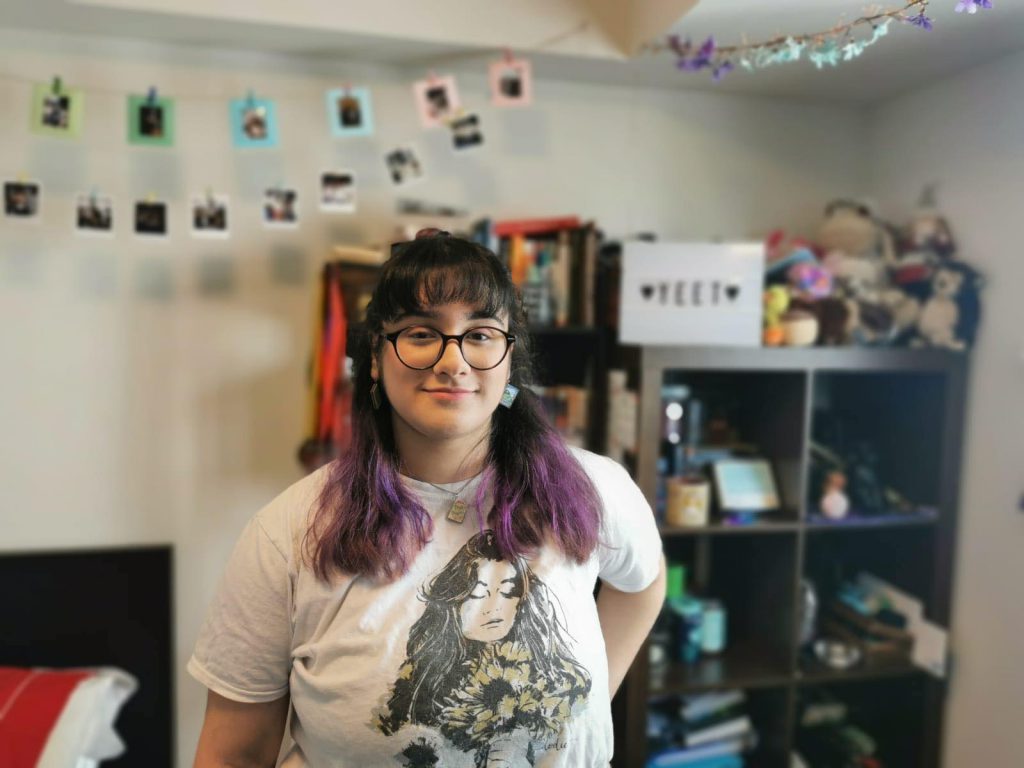 “It’s kind of lonely,” says Grade 10 student Holly Gomes. Tucked in a corner of her room and wearing a thick hoodie, she flashes a faint grin in an effort to lighten the mood during her interview with Graffiti. At first glance, she is just like the average North Toronto C.I. student during this period of physical distancing: tired, restless, and bored. But her reality is far different from that of the majority of students who spend their days completing online learning and playing video games.

Gomes is one of 309 teens and children in the province of Ontario who has been diagnosed with COVID-19. “I started getting a cough on April 2,” she said. “Two days later, I had a fever.” The fever began to worsen; two weeks later, it spiked to over 40 degrees celsius. That is when she and her family knew something was wrong. “My parents thought it was pneumonia,” she stated. “So we called the doctors and I was placed on antibiotics, but it wasn’t working”.

Gomes then went to Sick Kids Hospital on April 17. “I had a bunch of tests done and [the regular ones] all came back negative,” she said. But two days later, she received a phone call from the hospital: she tested positive for COVID-19.

“Honestly, I wasn’t that surprised,” Gomes reflected. “All the other tests came back negative, so there wasn’t much else that it could be.”

Yet, Gomes has no idea how she contracted the virus. “I have been in my house and I really hadn’t left to go anywhere,” she explained. Except for asymptomatic transmission, Gomes believes the only other possible source of her sickness is from a piece of food delivery that wasn’t wiped down. “But I really don’t know,” she admits.

Gomes spent the majority of April isolated in her bedroom. She fights boredom by connecting with friends online. Unlike most of her peers, however, she is rarely able to interact with her family, except during mealtimes or when they come to her door. But even meals are an inconvenience and a challenge for her. Before going downstairs to eat, Gomes must wear a clinical mask; when she is done, she heads directly back to her room. It’s a task most would find straightforward, but for Gomes, it is a struggle. “When I walk up the stairs, I get really out of breath,” she notes.

Her cough and fever have also persisted for over three weeks. Though COVID-19 symptoms manifest differently in each patient, Gomes describes her experience to be similar to the seasonal flu, “but just much longer, which is making it worse”.

There are some days when Gomes feels that she is on the mend, but these periods of respite are often followed by a period when the symptoms come back in full force. “At the beginning, the fever was around 39 degrees celsius, then it went down,” she recounts. “It almost went back to normal, but then it spiked again. It is really confusing because my fever is so inconsistent.”

It is this level of uncertainty that drains Gomes. “Everyday I wake up and hope that I don’t have a fever,” she says. “But I really don’t know when it’s going to end.”

Uncertainty is also something that has loomed over Grade 12 student Deena Shirkool and her family since the pandemic began. Shirkool, who lives with her mother, would usually visit her father every weekend – catching up over dinner and staying for the night. But in the past month, she has only visited her father once and doesn’t know when she will be able to see him again.

Her father is a neurologist who splits his time between a clinic in Guelph and a hospital in Toronto. According to Shirkool, “it would be very high risk” for her to visit him and his husband, who is a secretary at the clinic.

The only time she managed to visit them was in mid-April, immediately after her father tested negative for COVID-19. Because she had been isolating and her father knew that he did not have the virus at the time, they were willing to take the risk in order to see each other, perhaps for the last time for the foreseeable future. “Even then, I couldn’t be near them, I couldn’t hug them – I couldn’t do anything of that sort,” she noted.

Since then, the only contact Shirkool has had with her father and her stepdad is via video calls. “But video calls aren’t enough compared to the personal and physical interactions,” she explained. “So, it sucks a lot. I don’t think there is going to be a situation where there is no risk in seeing him anytime soon.”

Back at her mother’s small apartment, where she currently resides, Shirkool is preparing for another change: her mother, who is a scientific researcher developing technology to identify diseases such as COVID-19, returns to work at the beginning of May, when her leave of absence ends. “I’m just trying to make sure that I don’t physically interact with her as much,” said Shirkool, who is trying to employ strategies that will limit the amount of contact she has with her mother when she returns to work.

For Shirkool, having two parents who risk their health to serve the healthcare sector has been difficult. “Of course, there is a selfish part of me that wishes they didn’t have to work. Like most families, I wish they were both at home,” she reflects slowly. “But I understand that it is thanks to these kinds of workers that the pandemic is less severe [than what it could be].”

For now, Shirkool is focusing on the positives. “On the plus side, they both provide essential services, so their paychecks are still somewhat coming in,” she highlights. “With everything that is going on, I don’t want to dwell on the negatives.”

Similarly, fellow Grade 12 student Emily Sakaguchi is trying not to focus on things that are out of her control. Sakaguchi’s grandmother is currently living at Heritage Green, a 167-bed nursing home in Stoney Creek that has seen four deaths related to COVID-19. Her grandmother has not tested positive for the virus, but there is the possibility that she could come in contact with it.

For the past few weeks – since an outbreak was declared at the facility – Sakaguchi and her family have been living with anxiety. “There is that stress of knowing that there are people of her age being diagnosed with it and that is a terrifying thought to have of a family member,” she explains. “There is a level of risk to living [at the nursing home] right now and she is not completely safe.”

Adding to the stress is the lack of information that her family has been receiving from the nursing home. Sakaguchi found out about the nursing home’s outbreak from the news, rather than from her grandmother, who didn’t even know that there was an outbreak at her residence. “It feels like we don’t know what is going on,” Sakaguchi laments. “And that is frustrating.”

Sakaguchi, along with Shirkool and Gomes, is imploring her peers to stay at home and practice physical distancing during the pandemic, in order to protect individuals like her grandmother and healthcare workers. To the people who aren’t following the guidelines, Sakaguchi says that they should “reflect on the impact their actions can have on other people and why they think it is okay to play with the safety of others.”

Likewise, Shirkool is equally outraged at those flouting physical distancing guidelines. “I don’t understand why people are not able to comprehend the outcomes of their actions,” she stressed, after witnessing a group of about 20 people lining up outside a Chick-fil-A restaurant. “They are willing to risk the lives of the people who work in essential services in order to go outside for a small chicken sandwich.”

A few days after Gomes returned from the hospital, she posted a message to her Instagram story, revealing that she was diagnosed COVID-19. In it, she also begged her friends to follow the physical distancing guidelines. “It is unfair to go out,” she argued, “especially for all those working in the hospitals, who are risking their lives for people who aren’t staying home.”