Ms. Rogow’s vibrant presence and teaching have inspired many and will be remembered, as the Classics program and her time at NT comes to an end. 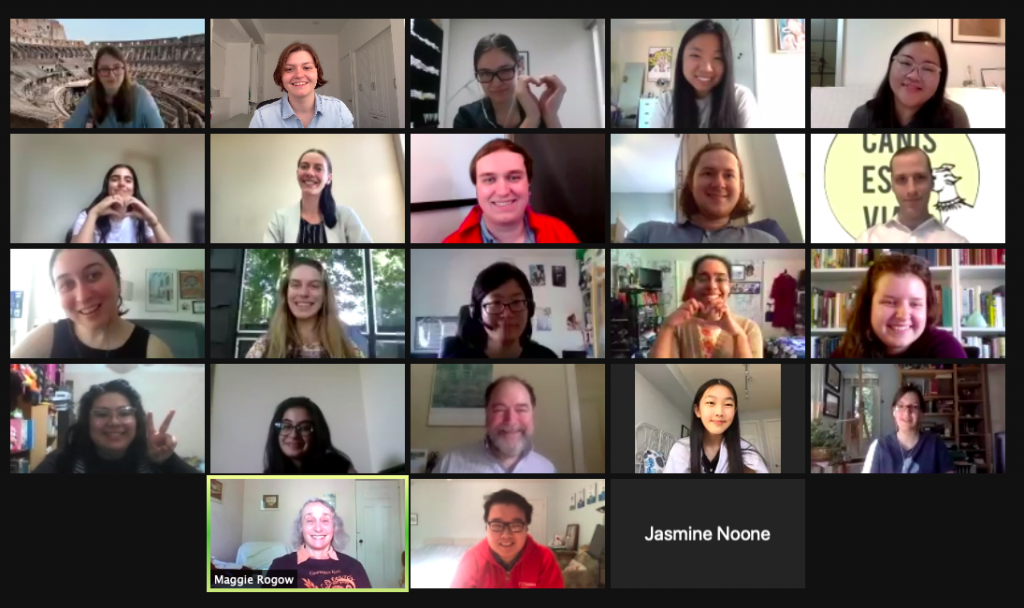 So went the familiar chorus that began every Latin class with Ms. Rogow. After 21 years of teaching Latin, French, ancient Greek, and Classical civilisations at North Toronto CI, and experiencing all five editions of the Cambridge Latin course to date, Ms. Rogow is now retiring.

Many students’ love of Classics first truly began in Ms. Rogow’s classroom, but what about Ms. Rogow herself? For her, it was learning about Greek and Roman ancient myths and legends in grade 6 of elementary school, growing up in New York City, that hooked her. This set her on a path to learn Latin and Greek, and more about Ancient Greek and Roman mythology. While these subjects were not being offered in her high school, she was able to study Classics courses in university. As many at NT might know, Ms. Rogow was part of the first class of women admitted at Yale, when Yale first introduced co-education. She was attending a local college and had an urge for something new. She recalls from weekend visits to her boyfriend attending Yale (the same person she is still married to): “I could see that Yale had a really great community which I was very interested in being a part of. It also had an outstanding philosophy department, and I had already decided that that was what I wanted to major in. So when Yale went co-ed I thought ‘Yes, this is for me.’”

Her interest in teaching led Ms. Rogow on a journey to attain a life centered around teaching and learning. “I just wanted to keep learning, and sharing what I was learning.” However, she initially thought high school was not for her. “I thought I was going to teach elementary school, and then I would be like that wonderful teacher I had in grade six.” But as she remarks now, “Of course, [high school] turned out to be absolutely perfect for me.”

When asked what her favorite part of teaching was, she said, “I have a lot of favourite things about teaching.” She loves working with students, making a positive difference in other people’s lives and shaping “who they are, what they are interested in, and what they are capable of.” Another thing she loves is “working with [her] colleagues at North Toronto… because [it] is a really amazing community.” Finally, she says that “being able to learn and deal with sophisticated concepts and ideas and languages and literature… is such a privilege.”

Ms. Rogow has taken in generations of students who entered her class as children, and left as confident and capable adults, “or proto-adults anyway,” as Ms. Rogow puts it. Ms. Rogow and her classroom were a safe haven for many students. During Latin classes the room was bustling, perhaps filled with students and their terrible acting, falling to the floor draped in tunics, and speaking exaggeratedly in Latin. Other times students were singing perfect verb endings to the tune of O Canada, or simply reading aloud passages and translating. At lunchtime it might have been quiet, but chances are there were a few students watching and learning as Ms. Rogow scrawled ancient Greek across the board, a course she offered voluntarily, and taught entirely in her free time.

Evidence of the passion Ms. Rogow and her students share was visible everywhere: in posters, Classical quotations, student projects, the chariot in the corner, even the agri-COLA bottle. Then there were the intangible things: certamen, Interlicious, “operatunities,” conferences, and trips abroad that Ms. Rogow has organized throughout her time at North Toronto, so that students’ experiences could be expanded beyond the classroom.

She has stayed committed to teaching those same students at lunchtimes, after school, through weekends and holidays, breaks, summers, and pandemics. Iva-Mari Miskulin, a current grade eleven student, points out that when school was shut down and learning went online in March of 2020, “she was the only teacher I knew that did actual synchronous learning.” Even now, she teaches ancient Greek online to me, a single student, and continues to make the best of google meets’ chat and whiteboard features – as painful as it is for writing Greek letters. If this article attempted to include everything Ms. Rogow has done for the NT community it would span pages and pages, and it is for this reason that she has been awarded the Coach John Taylor Award this year, the values of which she embodies and an honour she wholly deserves. Ms. Rogow’s love of teaching and of Classics is easy to see in her commitment and the students that flock to her, creating a vibrant community in NT’s Classics nook. “Ms. Rogow made a home for so many students through Classics, and worked tirelessly to make learning a rewarding experience,” says NT alumna Erika Sakaguchi. Indeed, Ms. Rogow has shown that Classics is by no means just a thing of the past, because how could it be when it has connected and revitalized so many people.

“When I first stepped into Latin in grade nine, I could see whenever she taught us how much she loved the language, and loved sharing it with us,” recalls alumnus Joshua Chong from his time with Ms. Rogow. “She never stops learning.” He notes how other than the gift of Latin and other languages, she’s given him curiosity, and says “I didn’t just learn Latin, I learned so much more.” Ms. Rogow took all us clueless niners and gave us direction, knowledge, and most of all, as Josh says, curiosity, the ability to face the world and relish in everything we don’t yet know, with the foundation of Classics at our feet and an excellent teacher at our back.

Ms. Rogow leaves NT students the same message she leaves all her students: “Follow your passion. Try to orient your life around things that you really care about, and you’ll find a way to make a living out of that. Explore the things that are really important to you, and inspire you, and motivate you, and make that your guide.” In retirement Ms. Rogow hopes to teach Latin in the Saturday morning program to make Latin available to students, to stay part of the Classics teachers community, to keep working with the Ontario Classics federation – a group that promotes Classics in Ontario, and to continue collaborating to create French curriculum. “In addition to that,” she says, “I would just like to have a lot of time to read, ride my bike, be with my family and friends, and travel;” some places on her bucket list are Istanbul, Viena, and Prague. This summer, Ms. Rogow will be working with a small team of NT alumni to create a collection and digital archive of Classics at North Toronto.

Ms. Rogow singularly held up the Classics program at North Toronto, and with her departure comes its end. However, during her time here, she ensured that Classics will live on in all of her students. We thank you, Ms. Rogow, from the bottom of our hearts, for everything you have done, for your infectious love of Classics, for your incredible patience, empathy, steadfastness, and for sharing your time and wisdom with us all for as long as you have. Gratias maximas tibi agimus! We wish you all the best.

It’s that time of year NT. Who did you have on r

We caught up with @ntnorsemen female president, Al

Want to write for Issue 2? Now is your chance! Com